Lazio is not a football club

With its nature, history, culinary tradition and friendly inhabitants, Lazio’s only island group offers a great retreat. Even two days (including the trip to and from Rome) can be enough to refuel.

“Welcome to Ponza,” says a tall man. He shakes my hand. I almost also expect to have a flower lei put on my neck, like when you go to Hawaii. I have just arrived on the one and only island of Lazio that you can get to by ferry. The tall man’s name is Maurizio Musella. He is a true ‘local’, or years ago, what they called a native.

He will show me the island. I drive my car, and Maurizio guides me to show his island. I have to follow his authentic-looking, worn-out scooter that is actually too small for his shape. In fact, you don’t need a car at all in Ponza. There is a regular bus service from Ponza Harbour to Cala Gaetano, from one end of the island to the other. And back again.

The first thing that Maurizio shows me is Chiaia di Luna, a magnificent bay with a one-hundred-meter high wall of yellowish rhyolite stone and tuff. The erosion is in full swing, causing debris to come down. Part of the beach is therefore not accessible. Boats and a large sailing ship are anchored in the bay.

Scenes from the film Satyricon (1969) by Federico Fellini were shot on the beach. Here we also see the 18-year-old Sofia Scicolone when she makes her first appearance under the name Sophia Loren in “Africa sotto i mari”. She can be seen in a sort of bikini, quite exceptional for a 1953 film. It probably didn’t hurt her career.

Maurizio’s scooter drives up a winding asphalt road where there is a view over the bay of Ponza Harbour. He points out a number of houses. “These houses are excavated in the rocks. They added an appendance with the material that was released from the rock.” The road ends where there is no asphalt left. We are on the north side, at the end of the island.

Down below is Cala Fonte. There is a small natural harbor with a rock in the shape of a moon that serves as natural protection. A gozzo, a small wooden fishing boat without a mast and cabin, enters. The fish that wash ashore here are brought to Igino’s restaurant. The place is still closed, but Igino, the owner, wants us to try his home-brewed fennel liqueur. It looks like dark limoncello but tastes like pastis. Delicious, even though it is still morning.

You should enjoy Ponza from the sea. There are numerous boats, such as the gozzi, that make daily trips around the island. I opt for a motor-driven flatboat, which is equipped with a sun deck. There are around twenty other guests with me. From Ponza Harbour, it goes south. The first attraction are three neatly dug out square caves of Pilate, half of which are filled with water. 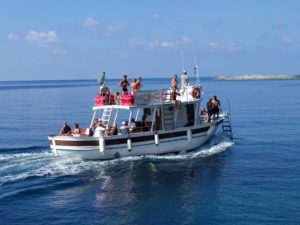 They are from Roman times, possibly used for the cultivation of giant eels. Perhaps disobedient slaves were also imprisoned and eaten by these eels, the captain says. Buon appetito. The rocks that rise from the water are called “ants”. We are taken from the eels to the ants (“formiche”). In the distance, you can see the perimeter of the island of Ventotene, Ponza’s sister.

The crossing to the island of Palmarola is around four nautical miles. The islet is known for the obsidian, black volcanic glass that is mined there. On the east side, a chapel has been built on a rock that can only be reached by sea. A steep path leads up to it. On the beach of San Silverio we make a stop for swimming. The water is incredibly clear. The sea around the Ponzian Islands is a paradise for divers.

The water is clear and clean; there is sand everywhere on the bottom and there are numerous bays and caves. There are also shipwrecks scattered here and there, from Roman times to the twentieth century. Everything a “sub” wants. Gianni lists what he encounters during diving: perch, sea bream, octopus, reef bass, saddle sea bream (to satisfy your curiosity, that is a blue oval fish), homarus, lobster, yellow-tail, tuna, tooth bream, sponge, moss animals, etcetera.

On the shore, I meet my patron saint again: San Maurizio. He brings me to my accommodation that night. I stay in a sort of Greek villa (white painted, flat roof). Because it is on one of the highest points of the island, I have a panoramic view of the sea. The ambiance is romantic, with a glass of Don Ferdinando (a local sparkling wine) and a terrace view of the sunset over the island of Palmarola. Too bad my wife isn’t there.

We eat with a group of other travelers: two Frenchmen and a piano teacher from Puglia, at Assunta’s. Assunta serves the best food Ponza has to offer. The antipasti dishes are spettacolare: “insalata catalana” (a cold dish with potato slices, shrimp, tomato, cabbage), a “tris” of shelled onions, artichoke hearts and tuna and polpette di merluzzi, cod balls. Our starter is scialatelli pasta with fish pulp, a typical dish from the Campania area. We drink a local Biancolella wine with it. 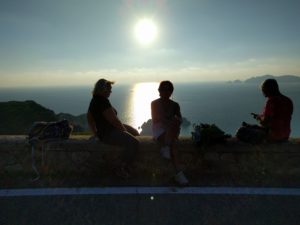 The Biancolella grape was imported from Ischia, the famous island off the coast of Naples. The enogastronomic tradition on Ponza is actually based on Naples. This has been the case since 1734 when the Bourbons, rulers of the kingdom of Naples, took possession of the island and the first settlers came there. A serious infrastructure was set up. The modern port was built.

The fact that Ponza belongs to Lazio is due to Benito Mussolini. Lazio had no islands. You have islands in Tuscany (Elba for example) in the north and in Campania (Ischia, Capri) in the south. Mussolini could not deal with that fact. So one day in 1930 he decided that Ponza was from that moment on a part of Lazio.

It is sometimes quite nice to be a dictator.

How to get there

Throughout the year, Ponza maintains a daily connection with Formia on the mainland, and it is a 2.5-hour journey. The island can also be reached from Terracina. In the summer it is also possible to take the boat from Anzio. The hydrofoils (‘aliscafi’) go faster, but do not leave when there is bad weather. Anzio, Terracina and Formia are accessible by train from Rome. The station and the harbour of Formia are within walking distance.

Companies that connect to Ponza are Laziomar, NLG and Vetor (site says that it is ‘in maintenance mode’).

The (translated) text is a section from a chapter in the book ‘Lazio and the best of Rome’.

Bond is back in Italy