No more coins into the Trevi Fountain

Italy has been sealed off for five weeks now. Without tourists, no single coin is going to come in the Trevi Fountain. This has triggered an unexpected chain reaction.

It is noon when the void and silence reign at the Trevi Fountain. Until two months ago that was completely different. The fountain is a touristic hot spot.

A police post has been set up on the corner. The few people who pass by are checked by two officers. “The residents keep to the rules,” says one of them. 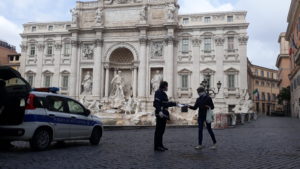 The closure of public space in Italy (‘lockdown’) means that you can only go out for necessary activities. You must stay within a radius of 200 meters from your home. Buying a newspaper or food, praying in a church, walking the dog, that’s about it. You can also go to work. But few people work outside because most employers are obliged to close their businesses.

Without tourists, the custom of throwing a coin into the Trevi Fountain has also come to an end (they say a coin guarantees your return to Rome). All those coins yield an average of around 4000 euros per day. That money goes to Caritas, a Roman Catholic aid organization that uses this to pay for soup kitchens and shelters in Rome. There is a risk that this aid come to an end. It is the unexpected result of chain reaction the corona crisis provoces.

Alms
Homeless people stand out more than ever in the empty street scene. An unkempt man is addressed in front of the Italian National Monument in Piazza Venezia by two police officers in their surveillance car. When the barefooted man approaches them, the two shout in unison to come no closer. When he approaches, they slam the doors and try to tell him something from the car. Then they drive away. 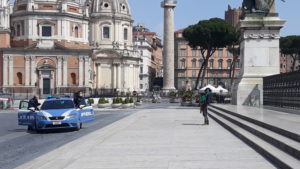 A little further on, at the steps of a church, Amin is sitting on a mattress. He has put bags in front of the church door. There is also a blanket. “Nobody comes by anymore,” he complains. “We don’t get alms anymore,” says the Tunisian.

It is almost half past one when the baker on the other side of the street stock up the situation. “You are the eighth customer today. It is a drama. We are doomed to death”, says the woman behind the counter. Yet she remains open. “Even if we only earn 150 euros a day, it is better than nothing.” 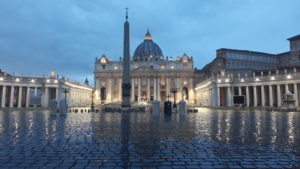 It is also quiet in the Vatican. The Angelus prayer on Sunday has not been spoken in the square for weeks. As an exception, the Pope came to St. Peter’s Square on Friday evening (March 27, 2020) to pray at a completely empty square for the end of the corona crisis. The only spectators were about fifty photographers, me and thirty police officers watching on the edge of the square in the rain.

Blood bank
In the city center it may be as if a cannon has been fired, in the suburbs there is more movement. There is a quite some traffic on the way to the hospital for blood donation. The nurse who takes a drop of blood for the blood test says that they are busier than usual. “About sixty people pass by every day, during this period double the number. Romans always show their good side when there is an emergency.”

The blood bank staff each wear a different model of mask. A male nurse has attached a piece of fabric with two elastics to his face. Such caps are already higglingly referred to as “lens wipes” and are not virus resistant. 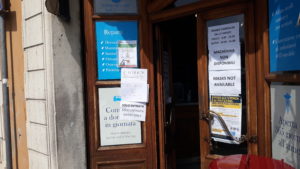 There is still a shortage of mouth masks six weeks after the first source of infection appeared in Italy. “I have only received a small amount a few times since the onset of the crisis,” said Andrea, a pharmacist near the Colosseum. “But if I call the supplier now, he won’t even answer. In any case, the caps that do arrive no and then are surgical nose caps and not respiratory masks that provide real protection.” 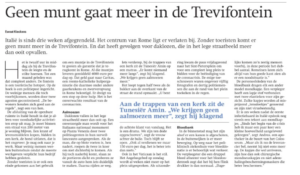 Help, the Italian beach is drowning