The Italian author Marco Balzano wrote an interesting novel about the turbulent history of Italian Tyrol around the Second World War. 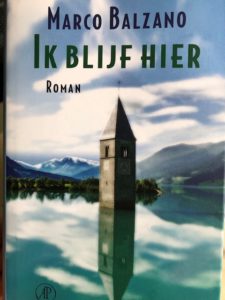 The book is called “I’m staying” (“Resto qui”). The back of the book writes that “Resto qui” is about: “How a village in the mountains resists its own drowning”.

The village is Graun im Vinschgau. It disappeared underwater after the construction of a dam in 1950. The village is about 70 kilometers from Bolzano, in South Tyrol, or you could say Italian Tyrol.

South Tyrol (Südtirol in German) is the southern part of Tyrol that was given to Italy in an international peace treaty in 1919, even though the area had (and has) little to do with Italy, culturally and historically.

The plans for the dam construction were during the time of fascism (1922-1943). Balzano describes it taking thirty years between planning and implementation. He does this by introducing a female person named Trina. It is a clever form of storytelling because it makes the story very personal.

Trina addresses her daughter Marica. We don’t know why she writes to her at first. But it becomes clear that the fascists are in charge of Italy. They try to Italianize the area. We read that the German schools are closed and that signs are posted with the text “Verboten Deutsch zu reden” (‘forbidden to speak German’). It is surprising to read that, because in the time in Germany, there are signs that say “Für Juden verboten” (‘forbidden for Jews’), “Germans” are discriminated on the other side of the Alps. The parallel ends here of course.

Importing Italians, “half-illiterates from Sicily and the Veneto countryside,” as Trina writes, should lead to ethnic cleansing. This becomes even clearer in 1939 when the German-speaking South Tyroleans are given the option to go to Germany, with Germany’s consent, or stay in Italianized Tyrol. Only a small minority, including Trina and her husband Erich, choose not to go.

However, many residents of Graun see their rescue in Adolf Hitler. Michael, their own son, is also leaving for Germany to fight for the Nazis. When the Germans occupy Italy in 1943, Erich was also called into the German army. He flees. Erich and Trina don’t see anything good in Nazism. The absurdity of that time in South Tyrol is evidenced by the fact that Erich has already done his military service in the Italian army for three years.

The book makes it clear that the German-speaking South Tyroleans remain stuck between hammer and anvil even after the end of fascism and Nazism. The Treaty of Paris in 1947 gives them back their rights, but the inhabitants of Graun im Vinschgau are nevertheless crushed: the dam will be completed, their village will disappear, and they hardly will get any compensation.

Yet the core of the story is not so much the dam building. It is also about the themes of our own time (“migration, ethnic disagreement, abuse of power”), as wrote L’Espresso, an Italian magazine. But Trina’s story is primarily a history of abandonment and resignation. At the end of part one (the book consists of three parts), Trina finds out that her sister-in-law’s family has secretly left for Nazi Germany. They had opted for the ‘Option’ and also brought Marica with them, Trina’s youngest child.

Trina will never see her child again. But we will only find this out at the end of the book, when Trina and Erich have resigned to Marica’s disappearance and have resigned to the dam. “There is no time to torture ourselves because of what there was (..). Going further, as Mom said, is the only permitted direction. Otherwise God would have given us eyes on the side of our head,” writes Trina/ Balzano.

The (Dutch) translation is at a few points in the language node with the South Tyrolean issue that is still very topical. Last October 2019, Italy stood on its back legs because the provincial parliament in Bolzano had issued a ban on the use of the Italian name of Südtirol: Alto Adige.

Strangely enough, the book chooses to use the Italian name for Graun im Vinschgau (Curon). But you cannot imagine that Trina would write Curon. The back flap also says that Graun is in Trentino. As though the Italian province of Trentino is the same as South Tyrol.

Link: video interview with the writer

Previous articleProsecco is the new Champagne
Next articleSarah James