Longer opening hours, a renewed Raphael room and Bernini’s ‘wax’ statues. Those are some of the novelties that the Vatican Museums offer after COVID-19.

What’s new in the Vatican in a nutshell?

From 1 June, the Vatican Museums will once again open their doors to the public, after almost three months of health crisis due to the COVID-19 infection.

Barbara Jatta, the director of the museum, and her staff have not been idle all these months. She showed that to me, and other colleagues from the press, in the week leading up to the reopening.

Most changes concern the Pinacoteca, which is sometimes overlooked, because it is not on route towards the Sistine Chapel. The main room dedicated to Raphael in this part of the museum has completely new lighting. It used to be a rather dark place, but now the famous tapestries can finally be admired.

The pinacoteca still has to do without the only Leonardo Da Vinci in the museum’s possession. The canvas depicting Saint Jerome has been loaned to a museum abroad, and will remain there for several months.

A clever new setup of angels and the heads of two church teachers are arranged in two rooms (out of a total of the pinacoteca’s 18). These are made of wood and straw and served as a ‘wax model’ for Bernini’s bronze groupe on the main altar of St. Peter’s. I think it is a good choice to bring those ‘cheap’ statues forward. Now we have these Bernini statues in the same room as another grandmaster of Italian art: Caravaggio.

Perugino’s famous altarpiece (called ‘Decemviri’), which has always been in the pinacotaca, has been temporarily moved to a back room and now has a ‘hat on’. The altarpiece, which originally stood in the Palazzo dei Priori in Perugia, initially had an attachment on the top frame (‘cimasa’ in Italian). That piece remained in Perugia, the altarpiece went ages ago to the Vatican. Now, head and hat have been put together for a few months. Is it very pretty.

During this week’s quite exclusive tour, I saw numerous restorers at work, including one who worked on the famous Apollo, which now is in a different alcove in the Belvedere court.

In Raphael’s Hall of Constantine restorers put the finishing touches to the restoration of this room, that the last five years had been partially closed. Now you can see the four huge painted tapestries of Raphael’s design again. The actual painting was by Giulio Romano and his studio, because Raphael died suddenly in 1520 shortly after the assignment. Still, Raphael’s hand can be seen, director Jaffa said. So, when you get there, look for the allegorical figures of Justice and Courtesy, and you’ll also see Raphael’s hand. He even painted the two women in oil on the wall, rather particular. 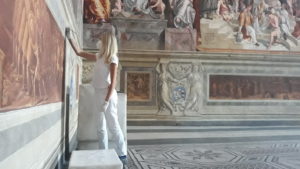 Only booking in advance

Access to the museum, including the Sistine Chapel, is only possible by booking in advance on the website. The opening hours have been extended: Monday to Thursday from 10am to 8pm and Friday and Saturday from 10am to 10pm. Closed on Sundays and four holidays this Summer (11th and 29th of June, 14th and 15th of August).

Because of the restrictions due to more social distance, far fewer visitors will have the opportunity.

To enter the Vatican Museums and Gardens it is obligatory to wear a mask covering the nose and mouth. The mask must be worn for the entire duration of the visit. All visitors are subject to temperature control. There are small pumps for hands cleaning everywhere in the museum. 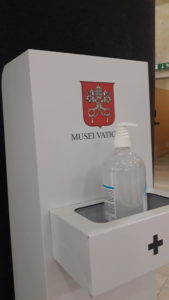 There are no markings on the ground that keep the visitors away from each other. But it will be the attendants who intervene if the distance is not kept.

In addition to the Vatican Museums, it is also possible to visit the papal villa and gardens in Csstelgandolfo again. Request via the Vatican’s website. Visiting is only possible on weekends.

10 Things To Do in Rome in the Rain