Bicycle Thieves (‘Ladri di biciclette’) is about a desperate hero that eventually becomes himself a bicycle thief. It is perhaps Italy’s best film of all time. It’s ranked number 10 worldwide, according to almost 400 famous contemporary directors.

When I had two hours spare time this week, I went to the location where the starting scene was shot (I got the place from a book about the neigherbourhood). The first scene you have to imagine like this: 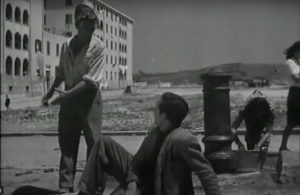 Rome has just come out of the Second World War and there is poverty despite the building frenzy to accommodate all the refugees and new dwellers. Our protagonist sits near a fountain and somebody tells him to get up. He then walks towards a brand new apartment complex. That’s the white building on the left. We’re on the outskirts of Rome. The are no other buildings. In the immediate vicinity you can see nature, the hills.

We are in the suburb of Tuffello (northeast of Rome).

70 years later. The apartment complex is still there. The stairs from the film (that’s where the protagonist walks to) are small and not easy to find. Luckily there is a bronze plate attached to it, which says that the scene was shot here.

Nature can’t be seen in any fields or roads. Everywhere are apartment buildings, not Rome’s most beautiful.

On the sister building stands a huge gaffiti. The text reads (translated):
“The most powerful weapon that a warrior can bring into battle is the absolute certainty that his soul is eternal.”
Gigi the plague

Gigi must be the diminutive of Luigi, ‘the plaque’ is a nickname for a wild boy.

A hundred meters away the next graffiti: “Little David, you’re always with us!”
The boy probably crashed with his scooter. Happens a lot. The way of writing (bold letters with ‘convex bellies’) indicates a fascist background of the authors.

I walk further. Another huge graffiti, this time on paper clued to the concrete of an underground structure: “Italy out of Iraq. Italy out of NATO”. With the symbol of the hammer and sickle. The sender is clear here. It’s nostalgic, in Italy you still have communists.

In a bar opposite the underground station Jonio the young bartender says that Gigi was in his class and died three months ago.
– Scooter accident, I ask
– No, heart attack

A man at the bar points me to a monument in a park (more concrete, less park). It was erected to remember the four firemen and four other people who died in 2011 as a result of a gas explosion in the nearby Via Ventotene. 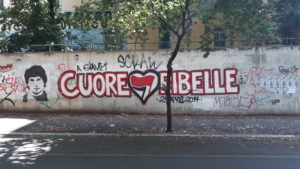 Around the secondary school Giordano Bruno are numerous griffiti where a certain Valerio is remembered. From this you can deduce that the boy belonged to a left-wing movement. Italy is often still detained because of the left-right dichotomy (communists versus fascists). “Valerio vive” or “Valerio lives” is written in huge one meter letters. It’s a convulsive cry. He’s alive! No, he’s not. I’m sorry. But somehow he got a role that was bigger than himself.

No bike thieves anymore in Tuffello. But young martyrs for an unknown or unimportant cause.

BOND'S TOUR OF ITALY Italy is a favorite of 007. Although only eight of the twenty-five James Bond films have been set in Italy, more...
Read more
Rome

Life just got a little sweeter

Life just got a little sweeter   First loves are quick to romance and often quick to lose. But impossible to forget. Fall in love with...
Read more
Current Affairs

The new Italian film museum couldn't find a better place than in Cinecittà in Rome, the mecca of Italian film. The musuem that opened...
Read more
Load more