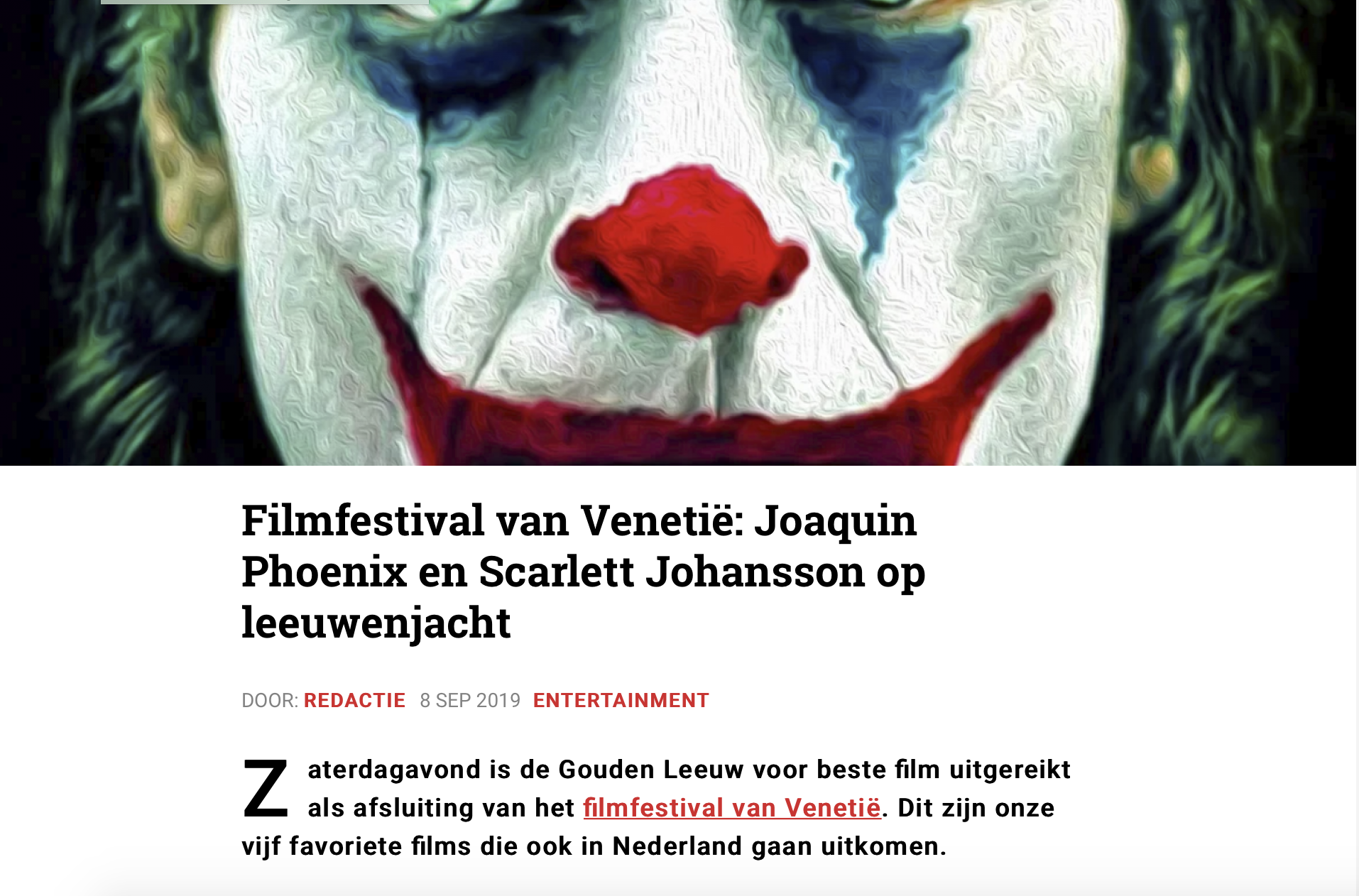 The joker of the Venice Film Festival went to… Joker.

That was not much of a surprise since the movie had the longest applause of the audience (8 minutes). Director Todd Phillips won the Golden Lion, the first prize. Joaquin Phoenix plays the role of Arthur Fleck, a failed comedian who is rejected by his environment and then changes into the Joker, a sadistic clown. A good role is also played by Roberto De Niro, who hosts a talk show. He first ridicules Fleck, but when he returns as the Joker, De Niro talks are over. Phoenix was of course given the prize as the best actor, but he did not win (Italian ‘home’ actor Marinelli did) as he has already had won it once in 2012 (for “The Master”). They scarcely give the Coppa Volpi award twice. The film will premiere on October 4.

This film by Roman Polanski is the winner of the Silver Lion, the second-best film. During the festival Polanski already won the praise of the audience and the criticism (together with “Joker”). “An Officer and a Spy” (“J’accuse” is the French title) is a must-see film. The movie revolves around the notorious Dreyfus affair in France. The captain of Jewish descent Alfred Dreyfus is accused in 1894 of espionage for the Germans. A year later, the officer Georges Picquart (interpreted by Jean Dujardin) finds out that Dreyfus has been set up. Picquart tries to get an explanation and risks his career and his life.

Marriage Story is what the Americans call a beautiful Divorce Drama. Scarlett Johansson and Adam Driver (or Kylo Ren in the latest Star Wars films) are in divorce in a way that is reminiscent of the film “Kramer versus Kramer”, the classic film with Dustin Hoffman. Scarlett and Adam have the potential to go through the proceedings smoothly, but lawyers manipulate things so that everything gets messy. Sounds familiar.

The film has been hailed by the critics. The film scores a whopping 100 percent on Rotten Tomatoes. Other critics think it is Johansson’s best role and the film has a good chance of an Oscar. The movie will soon be available on Netflix.

The director of Ocean’s Eleven returns with a story loosely based on the Panama Papers scandal. Let’s refresh the memory: in 2015 millions of documents from Mossack Fonseca, a financial services provider, were leaked to the press. This showed that thousands of often high-ranking people evaded taxes and laundered money (hence the film title).

The main role in this film by Steven Soderbergh is Meryl Streep, an older woman who loses her husband on vacation and then finds out that her deceased husband did not have a cent because of a complex insurance fraud. Determined to face the situation, Streep leads the scam back to a duo of unscrupulous lawyers, Jürgen Mossack (Gary Oldman) and Ramón Fonseca (Antonio Banderas), who bring poor unfortunates to financial ruin from their headquarters in the Panama tax haven. On Netflix in mid-October.

This debut film by Australian film maker Shannon Murphy is a real tearjerker. We follow the last months of Milla, a terminally ill teenager who falls in love with a small drug dealer. The parents don’t like it at first but start accepting him when they see Milla is getting better. In any case, it ends badly. It is one of the best films in the genre of (not) “coming of age” in recent years. There is also a lot to laugh about. The actors are unknown to a general public. Ben Mendelsohn does have a certain reputation (The Dark Knight Rises, Killing them Softly).

This article has been published in Magazine
FHM Netherlands, 8 september 2019

Previous articleNewsletter
Next articleHelp, the Italian beach is drowning

Venice keeps feet dry thanks to the Moses Dam