Rome is not the first destination you think of when traveling with small children. But it turns out that the Eternal City has a lot to offer for kids. However, you have to know how to find the right places. As the father of a ‘bambina’, I am going to take you on a journey through the city center to find entertainment for your children. 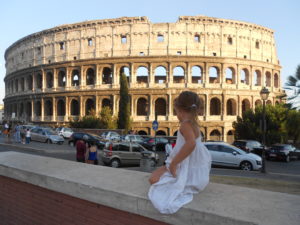 We start at Piazza del Popolo, the most beautiful square in Rome. It is traffic free and therefore a playground in of itself. There are four lions around the obelisk, and if the police is not watching, the kids can certainly climb onto the lions’ backs.

If you go through the city gate of the Popolo Square and walk straight ahead, you will eventually arrive in London, Amsterdam and Berlin. All visitors from Northern Europe entered the city through this city gate, before the invention of aviation. They had -and still have- a wonderful view of two almost identical churches (“spot the seven differences”). At the Piazza del Popolo, three streets form a trident and an obelisk that was taken from Egypt more than 2000 years ago.

In the church next to the city gate, the Santa Maria del Popolo, you can see beautiful funerary monuments. The left side of the entrance is full of skulls: one with some meat on it and and a hat on, and a marble bust of a dead man with crossed arms. Do you want more?

The Spanish Steps are close to the Piazza del Popolo. We take the quiet Via Margutta. At the beginning, number 110, is the small apartment block where Federico Fellini and his wife Giulietta Masina lived. Fellini’s film ‘La Strada’ (1954) could appeal to children because of the leading role of the girl Gelsomino (Masina’s alter ego). A small business is located at number 53b in Via Margutta. The shop is full of marble pictures and statuettes, all in an antique Roman style. The shop is never closed, at the most, the marble worker is just taking a walk and there is a sign saying ‘I’ll be almost right back’ (Torno quasi subito). You can let him engrave a text. That’s fun and educational.

The Spanish Steps are especially nice because of the fountain in front of it. Water comes out on both sides with fairly rapid speed. It tastes so good. But beware, the pavement can sometimes be slippery. The fountain is made by Gianlorenzo Bernini, of course (Rome is a Bernini City). The stairs of the Spanish Steps sit beautifully between the fountain and the church along two balustrades nót made by Bernini, but by Francesco De Sanctis, a lesser known artist.

The stairs (from 1726) are made to stroll down, not the one that you take to go from A to B as quickly as possible. In Italian, they are called the “Stairs to the Trinità dei Monti”, named after the church that lies above the steps. A little further is the McDonald’s (the first Mac on Italian territory – since 1986), which is always a success, because we are not only going to bother the kids every time with Slow Food.

Follow the signs and you will arrive at the Trevi fountain. Coin throwing always arouses curiosity, also because it is so un-Anglosaxon. Throw money in the water! Legend has it that those who throw a coin are assured of their return to Rome. About a half a million euros disappear into the water every year. The money is sucked up every Monday – literally – by cleaners with large vacuum cleaners, and it is donated to a charity organization. Don’t think any mischievous thoughts: the fountain is guarded 24 hours a day by the police.

Other than the coins, we also see two tritons (“mermaids”) that conquer two “hippocampi”, seahorses, while they pull the sea god Oceanus in a shell and chariot. Other maritime scenes can also be seen, such as the discovery of the source of this water, the Acqua Virgo, by a ‘virgin’ (top right). The Trevi is so special because it was set in an already existing Roman city palace. The owners did not appreciate that very much, but they couldn’t resist the pope … actually the popes. The construction took so long that three popes consecrated the fountain over a distance of thirty years (in 1735, 1744 and 1762). Vanity of Vanities.

Around the fountain, there are tourists all around. You can flee it by entering the small outlet San Marcello, a straightforward coffee bar with a high turnover rate of the coffee. That is often a good sign for the quality of the coffeemaking. The bar has some seating, where you can enjoy San Marcello’s pastas and main courses for a reasonable price. It is full of (white collar) workers. A lively and definitively not touristy place.

Not far from the Trevi, in a side street of Via del Corso, you will be introduced into the history of Rome in the so-called ‘Time Elevator’, a 3D film with special effects. Children and parents like it as a first day introduction activity.

Then head to the Pantheon. Take the Via de Caravita if you want to avoid the masses of tourists. The church of Saint Ignatius appears immediately. It is a masterpiece of illusion inside. The ceiling appears to be open and you can see that Ignatius is ascending to heaven. “Are the columns real?”, children will ask.

The dome is also surprising. If you then walk further forward the main altar, and then look again at the ceiling paintings, you’ll see what tricks the illusion did to you in the beginning. Children and adults alike find it wonderful to be a part of the illusion. The paintings are by Andrea Pozzo, a painter who later became a Jesuit, a master of illusionist images. The dome is a painted canvas of 17 meters in diameter. The church is located on a nice square that has a theater layout. Have a look at the balconies of the houses as though they are the balconies in a theater.

The Pantheon is very special because of the hole in the dome alone. Nine out of ten children ask: “Is there glass on it?” An absolute must is to visit the Pantheon when it rains. Then you don’t have to answer that question. 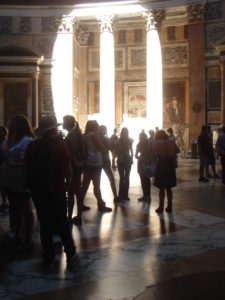 From the Pantheon you go to the square of Torre Argentina. In the middle, there is a large archaeological site with many marble blocks and columns of volcanic rock. No child will be really interested. The cats are cooler. One has three legs, the other only one eye, the third a bitten tail. This site is their sanatorium. On the corner of Via Florida, (mostly anglosaxon) ladies with time on their hands manage a cat shelter.

We’re almost at the Capitol. There, you get beautiful views over the Roman Forum. It is mandatory to visit the Chapel of the Child Jesus at a church on one of the peaks- the Santa Maria in Aracoeli.

The baby Jesus is also called the Santa Pupa, and children from all over the planet send him mail to tell him their desires of their heart (the mail is collected in a chapel next to the main altar).

He is not the only child that is revered in Italy. 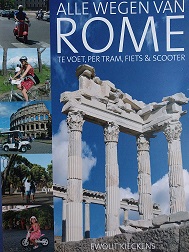 BOND'S TOUR OF ITALY Italy is a favorite of 007. Although only eight of the twenty-five James Bond films have been set in Italy, more...
Read more
Current Affairs

Vatican Museums after COVID-19 Longer opening hours, a renewed Raphael room and Bernini's 'wax' statues. Those are some of the novelties that the Vatican Museums...
Read more
Film

Float through Fellini’s Subconscious with 8½ A Film Review   8½ is one of Federico Fellini’s most famous films, released two years after La Dolce Vita, in...
Read more
Load more