Tom Cruise is back in Rome as Ethan Hunt for his latest Mission Impossible, a film that is scheduled for Autumn 2022 or Spring 2023.

In 2006 the American actor was in Rome shooting the third film in the series of Mission Impossible. Parenthesis: the same year he also was in Rome to marry Katie Holmes (on Lake Bracciano, near Rome actually), a not very fruitful affaire (they divorced in 2012). Mission Impossible 7, as the lastest offshoot is called, (the final title will follow soon) must be more succesfull. The film is largely shot in Rome.

The shooting started October 6, 2020. We were able to greet Tom Cruise (from a distance) in the Monti district, where we live. Unlike Donald Trump, Cruise wore a face mask. That is an obligation in Italy. Hopefully for moviegoers (or Netflix stayers) it will come off during the shooting.

At the end of the afternoon we (probably, it was not entirely clear) met Cruise again on the Via Panisperna while they run a car chase scene. A similar scene was shot here in 2014. Daniel Craig was followed by a ruthless killer, in Spectre, the last James Bond film.

The shooting lasts seven weeks, as the city of Rome informs. The filming “is a very substantial economic and organisational commitment, adopting scrupulous measures to prevent the spread of the virus, with daily tests for the entire crew and cast and disinfection of the environments and equipment.”

The mayor of Rome had finally had good news for her citizens: of the approximately 35 million euro production costs in Italy, over 18 million will be spent in Rome. 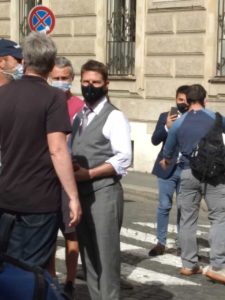 Major international film productions continue to choose Rome. After the lockdown there is an intense recovery. In the period June-August the requests for filming to Rome’s Cinema Office were 596, an slight increase of 13 compared with 2019.

The same week (Oct. 5, 2020) we spotted the set of Jack Ryan as filming for the Amazon thriller. The shooting found place in front of the Hotel Saint Regis (near Piazza della Repubblica).