Italy enjoys the benefits of a strict corona policy

Database is at the heart of the Italian art squad

Italy enjoys the benefits of a strict corona policy

A strict lockdown that lasted longer than in other European countries and a gradual lifting of quarantine. These are some of the factors of Italy’s success in the fight against the spread of the corona virus.

Italy is currently significantly less affected by the coronavirus than neighbouring France and Spain and actually most European countries. The last two weeks, Spain and France have been affected the worst with 320 and 204 new cases per 100,000 inhabitants respectively. This is reflected in figures from the European Centre for Disease Prevention and Control (ECDC). Italy is doing better with daily some 1800 new cases and 34 new cases per 100,000 inhabitants in the last two weeks. The number of Covid-19 patients in intensive care has fluctuated recently around 250.

In April, ten times as many patients stayed on that ward. Italy was severely affected at the time. The death toll rose to over 30,000 in three months. “There is a fact-based reason why we are now much better off than other countries,” said Nino Cartabellotta, director of a foundation for the promotion of science-based medicine on the radio yesterday, “and that is the fact that Italy has introduced an earlier, stricter and longer lockdown.”

The Italian quarantine was very tight with strict enforcement by the authorities. During the lockdown, a total of 450,000 fines were imposed on those who failed to comply. Italy reopened after two months, but very gradually. Spain had also introduced a strict lockdown, but reopened the country at the end of June at once. Italy did not. In football stadiums, for example, spectators have been allowed back in for a fortnight, but not more than 1,000 people, who, moreover, have to be dispersed. There is strict supervision.

Sergio Mattarella, the Italian President, said on Thursday that ‘Italians love freedom, but that seriousness is also close to our hearts’. That was his response to the statement by British Prime Minister Boris Johnson the day before. He had said in the British Parliament that the United Kingdom has more Covid-19 cases than countries like Italy, because the sense of freedom would be more widespread in the United Kingdom.

The seriousness of the average Italian is astonishing. The idea is that Italians are individualistic people who care little about rules. In reality, Italians have shown that they take government action in general seriously. There is also little bickering about corona policy. The duty to wear a face mask in closed public places is generally accepted. In public transport, it is not possible to travel without it. The same is true in shops. People talk to each other about corona behaviour.

“Today’s figures cannot be compared to those of March and April, because with the lockdown we are actually ‘back to the start’, as with the game of goose,” says Cartabellotta. Yet he warns to stay alert. “The figures for hospital admissions and intensive care are going up anyway.” 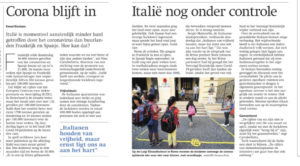 Monza: Royal city in the shadow of Milan

Ten minutes. That is the travel time by local train between Milan and Monza. Then it is a good five minutes' walk to the...
Read more
Events