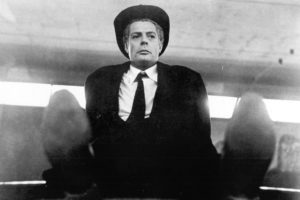 Guido, a filmmaker, and the main character in 8½ (‘Otto e mezzo’), grapples with his creativity and his sense of self while also trying to launch a new movie. He often fantasizes about his various lovers and thinks about his childhood all while actors harangue him about their roles and the film crew impatiently awaits his next move. Guido’s film production turns more autobiographical as 8 ½ progresses.

The infamous Marcello Mastroianni, who was the star of La Dolce Vita, plays Guido, a famous Italian film director. Guido dives into the whirlpool of his psyche and really does anything other than making a film.

Guido contemplates everything: women, childhood, and the hostile world of film. He never makes his film but contemplates honesty and confusion in his messy but beautiful life. At the end of 8½, Guido realizes that he needs to accept his life for the messiness that it is.

A quote from Guido himself: “Now everything’s all confused again, like it was before. But this confusion is me as I am, not as I’d like to be. I’m no longer afraid of telling the truth about what I don’t know, what I’m looking for, what I haven’t found. Only this way do I feel alive.”

What are we looking for? Have we found it, or have we just convinced ourselves that we have? These are a few of the questions posed in this classic Fellini film.

As Fellini says: “All art is autobiographical; the pearl is the oyster’s autobiography.” So, did Fellini himself chant “Asa Nisi Masa” as a little boy (as piccolo Guido does in the film)?

8½ has an updated trailer to promote the new restoration of the film.

8½ is available on: YouTube and Vudu and Amazon Prime and Google Play.

Help, the Italian beach is drowning